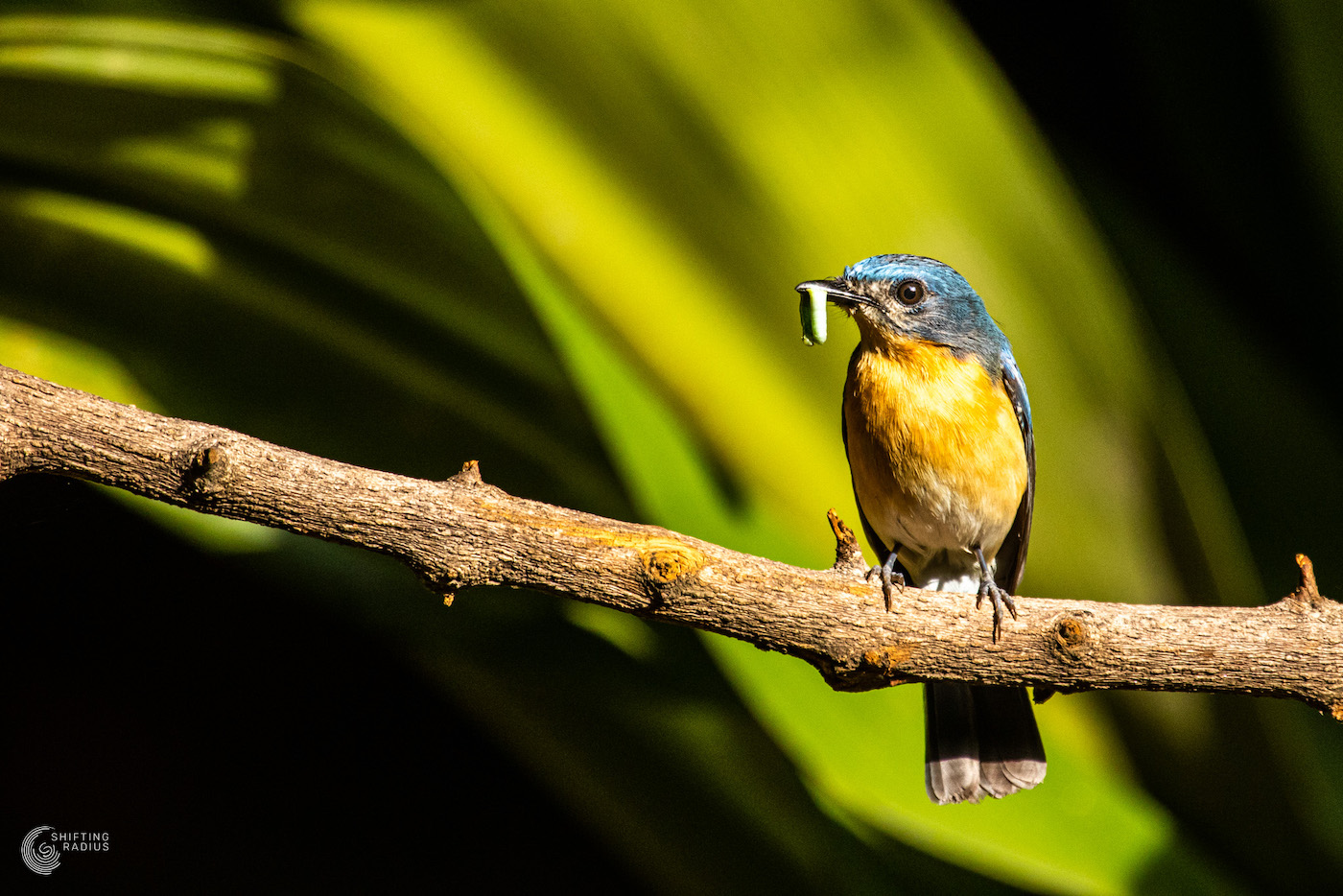 A song that became a story

”In order to see birds, it is necessary to become a part of the silence.

For about 3 months, a Tickell’s Blue Flycatcher couple hung around Chinmayie and Ravindra’s back garden and seemed like they did nothing. I spent a considerable amount of time in their backyard, extremely curious as to why they aren’t doing anything. As in, I haven’t seen them eat or carry any nesting material even once. C and R are interesting people so are Alaru and Adhya, but I had to be sure that these two birds were not here for their company or just the good vibe in this garden. 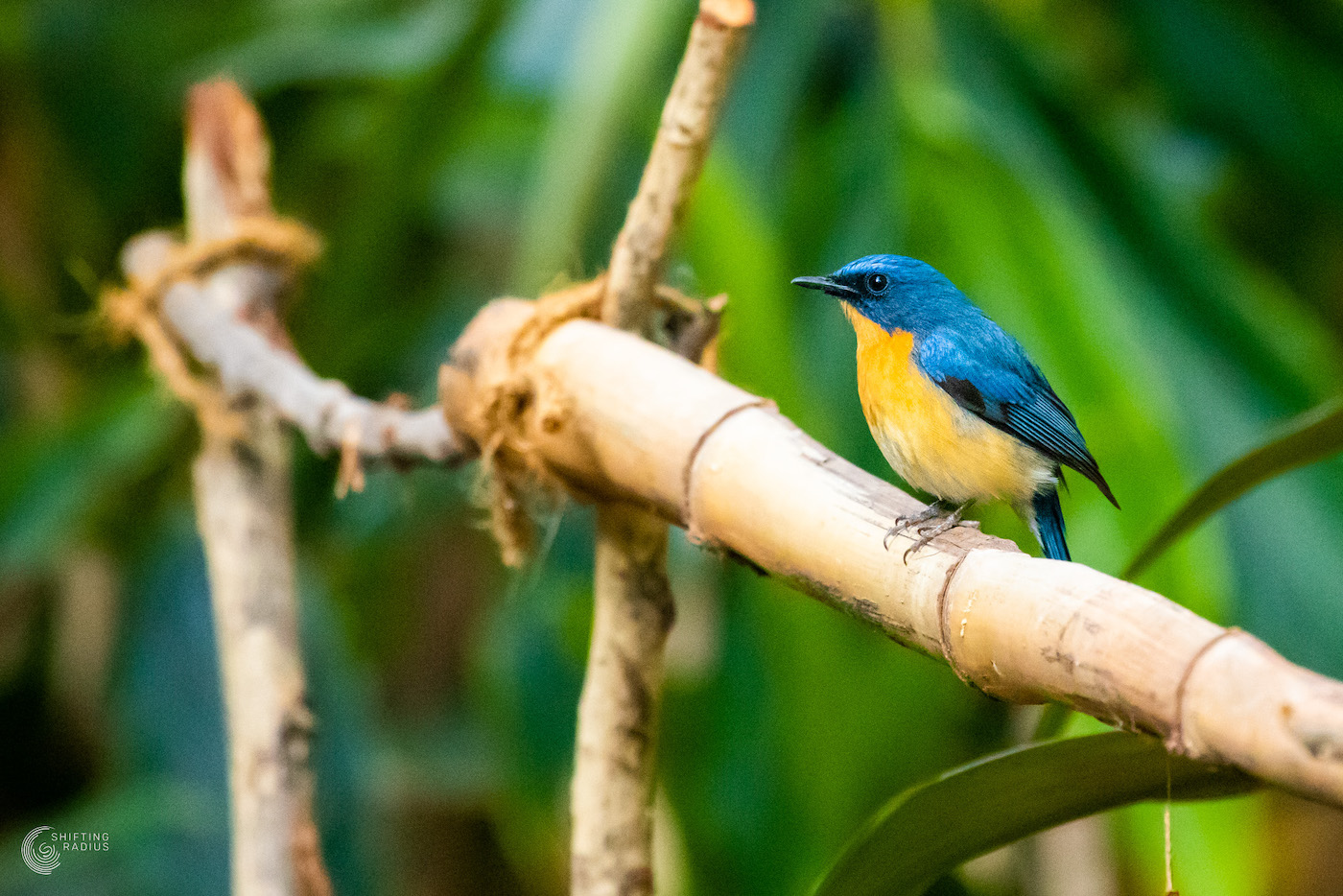 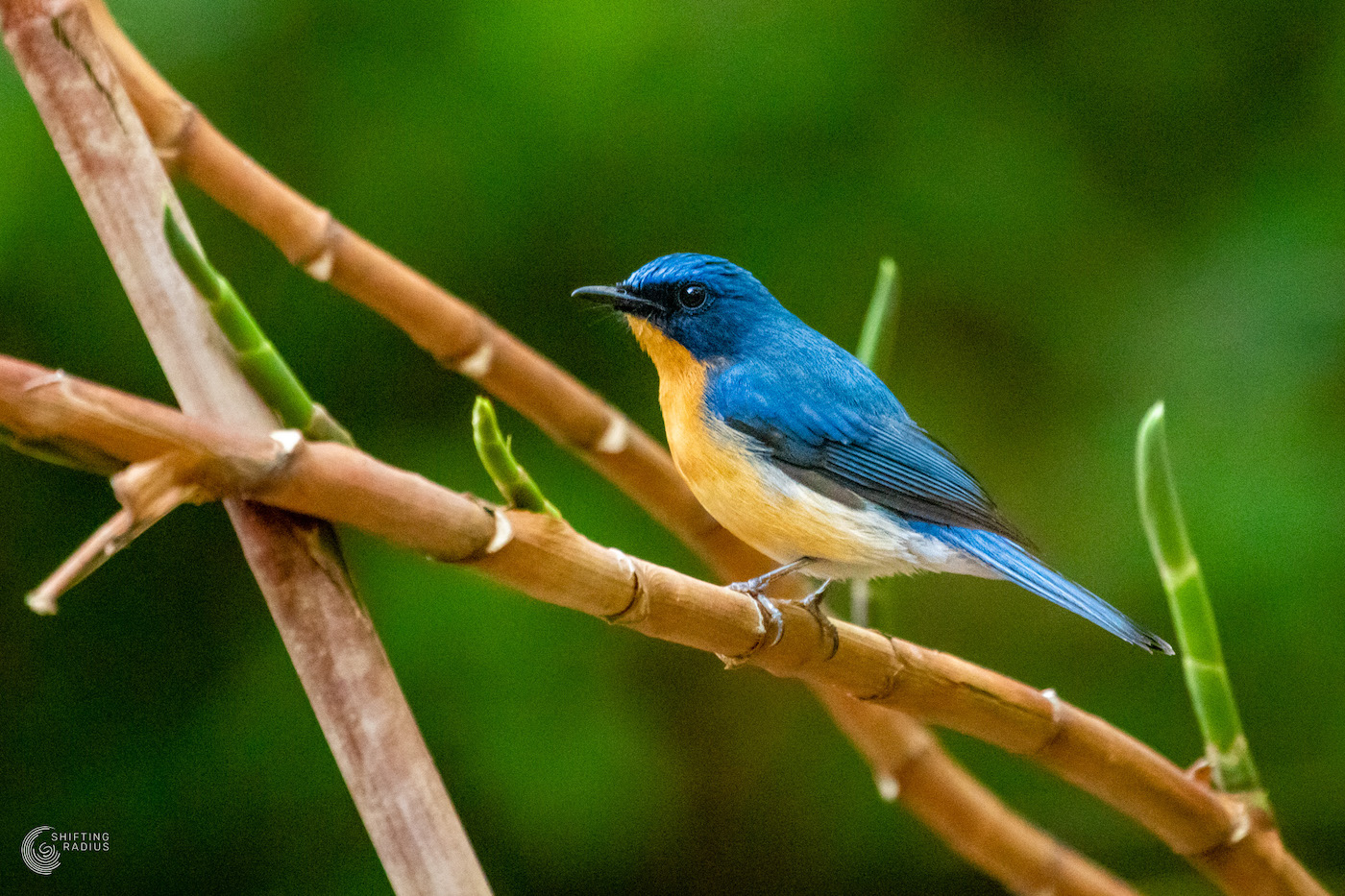 All the way till 28th March, still, not a clue what they were up to. On 29th April, I wrote my first post about these guys. As an update to that post on the 30th, I had written how we found the nest. (Trying not to repeat too many of the same visuals already posted, hence do check that post if you haven’t already and come back to this.)

Ah! You are back. This is how much the post has moved.

This species is so secretive about its nest. In all these three months, not once did they give us any clue that they are building a nest near a window ledge right next to where all of us hang out most of the time. I have seen and documented other species before and at the very least I have seen them carry nesting material. On the 30th morning, as I was clicking them as usual I saw the female go into that corner and not return for a while. That’s when I had to look at that spot and figure out where the nest was. Not only was the nest complete, but by that evening there were 3 eggs in it as well.

Please note that this is the only shot I have taken by going closer to the nest after making sure that the parents were away for a considerable amount of time. The next one week or so went by with the parents taking turns in protecting the eggs and waiting for them to hatch. These shots are taken on 4th May from their balcony. As I was half hanging from their balcony one part of my brain told me I am stupid but the other had this played out in my head “Your mission, should you choose to accept it… As always, should you or any of your wildlife group members be caught or killed, the Secretary will disavow any knowledge of your actions. This camera will self-destruct in five seconds.”

I may have yelled “Guruvayurappaaaaa” after that last line. 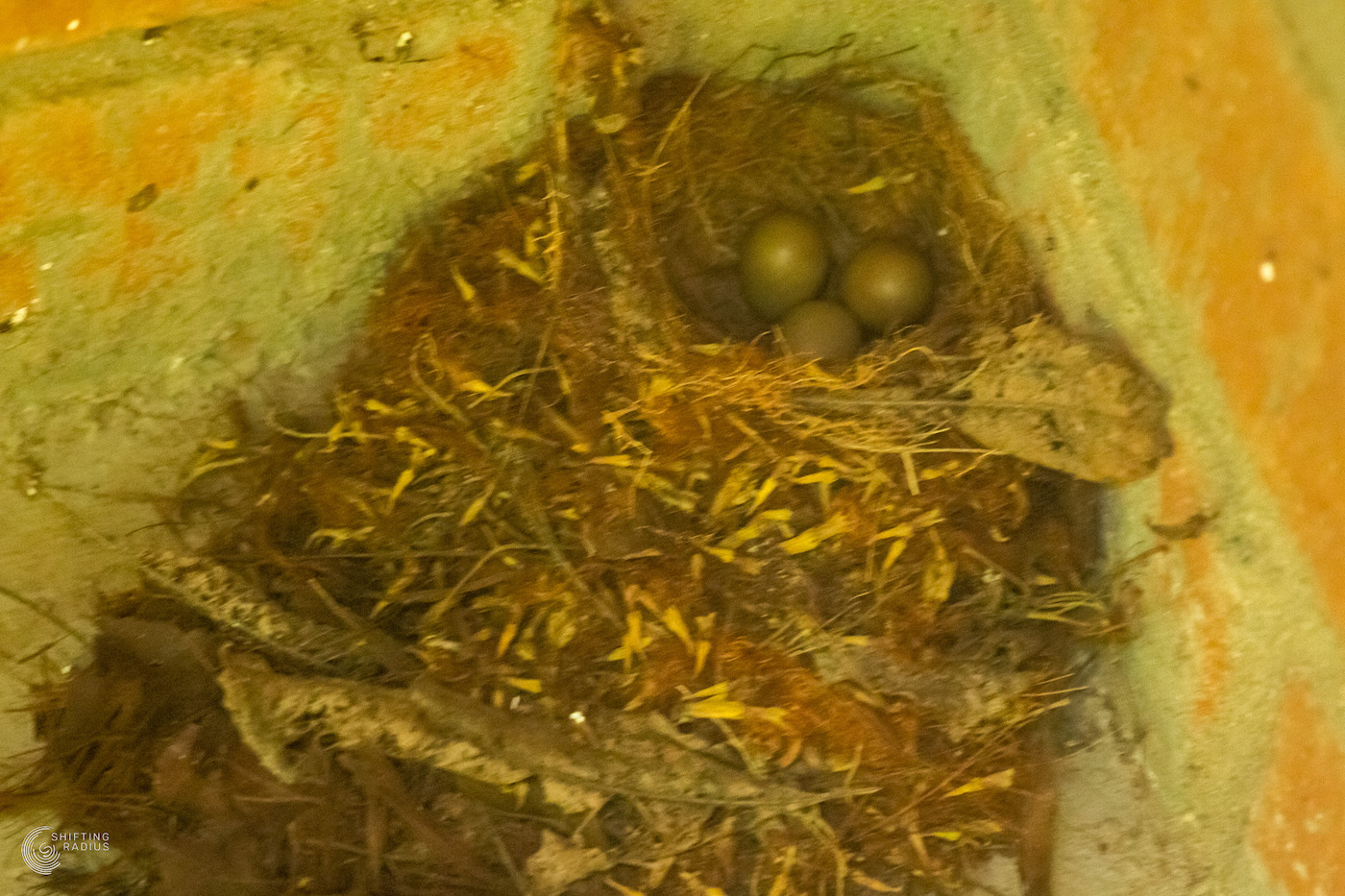 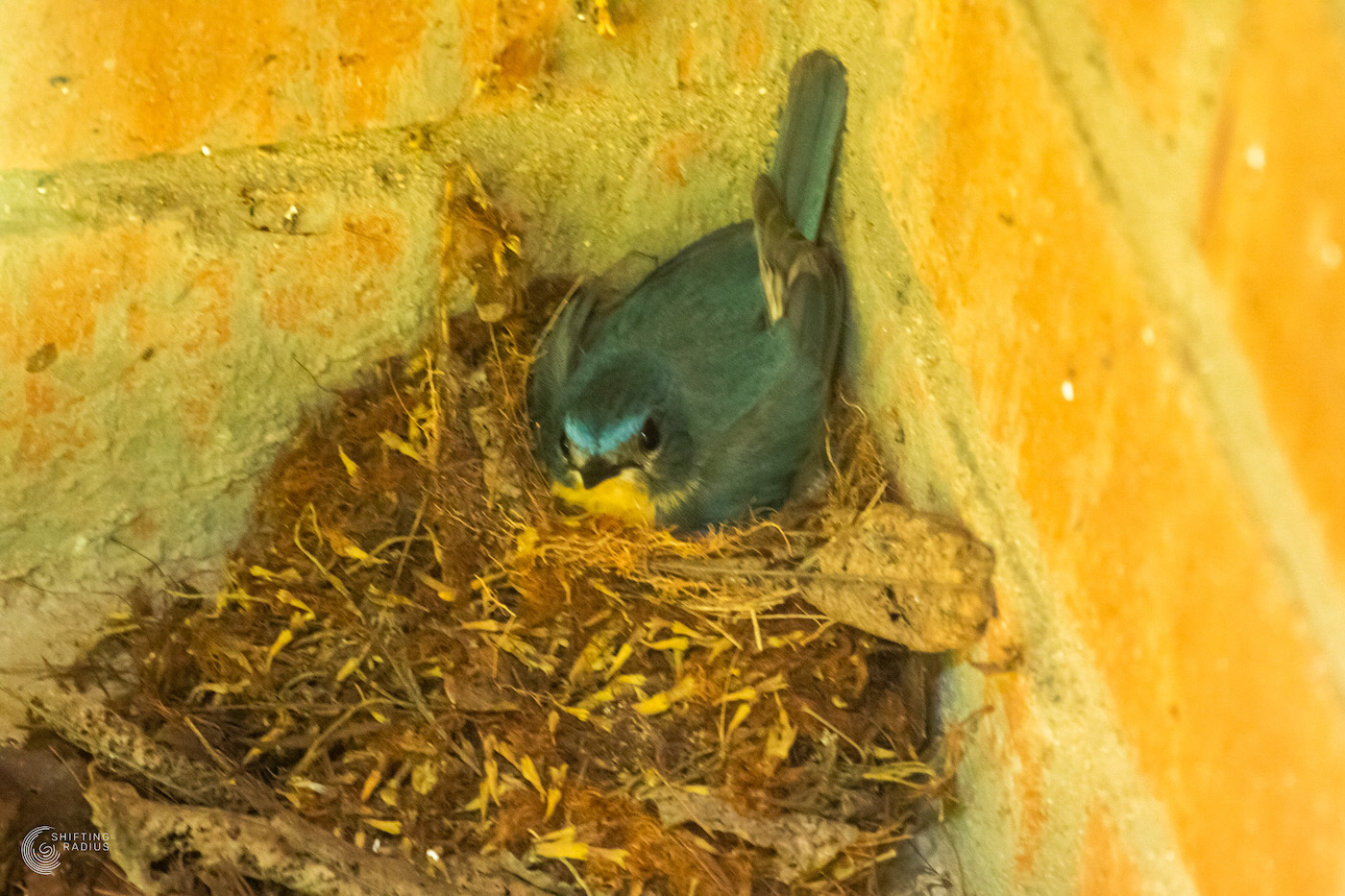 By the 6th, C and R had seen the little chics from the balcony. And this is their first visual (or non-visual since dear Tom Cruise couldn’t hold the camera steady.) 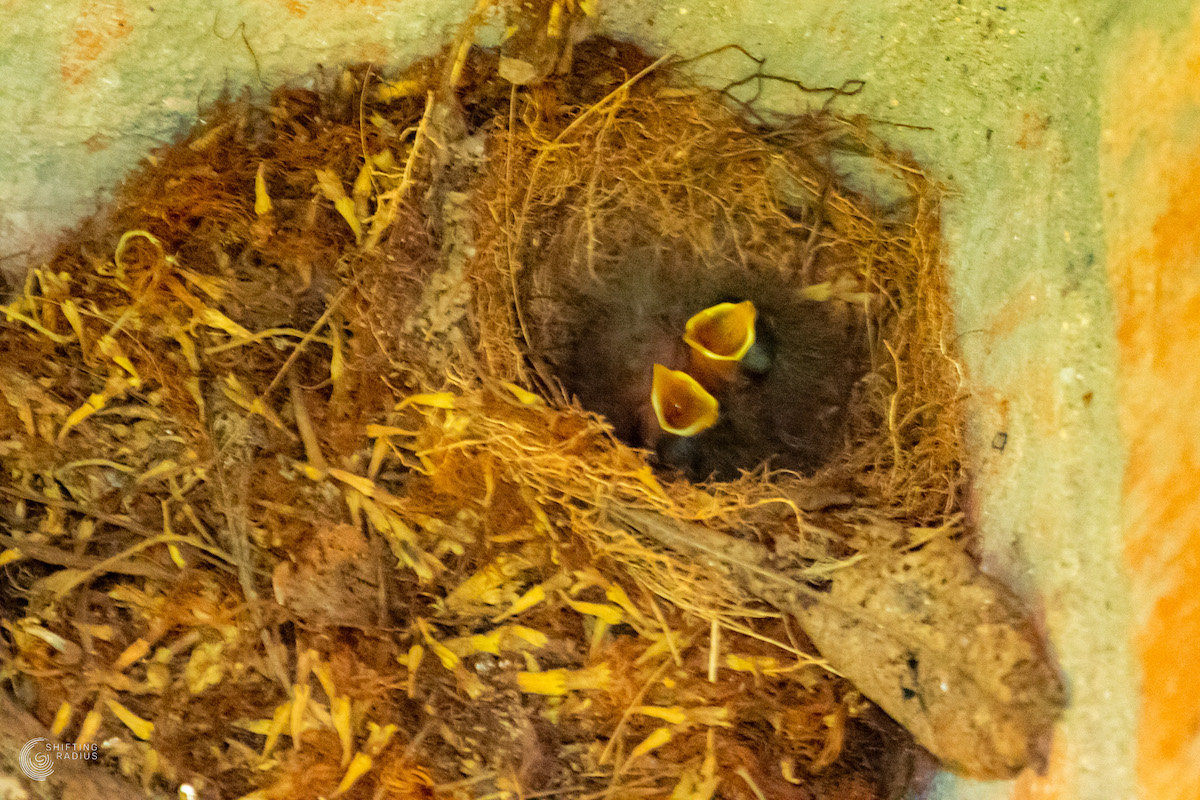 Of course, with much excitement, I made another blog post about how the parents were on a feeding frenzy. And yet another post with more pictures of the same routine.

I feel your pain. This story has moved well, we are almost there.

Managed this shot and a short super shaky video on the 11th. Interestingly, it just feels like only two are alive/ around. Have no clue what happened to the third. 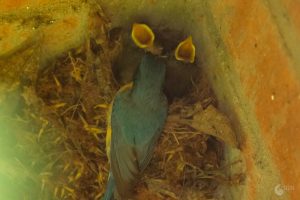 Between 13th and 14th, I just focussed on getting some good profile shots of the parents. As it was only a matter of time before this family moved on from this spot. 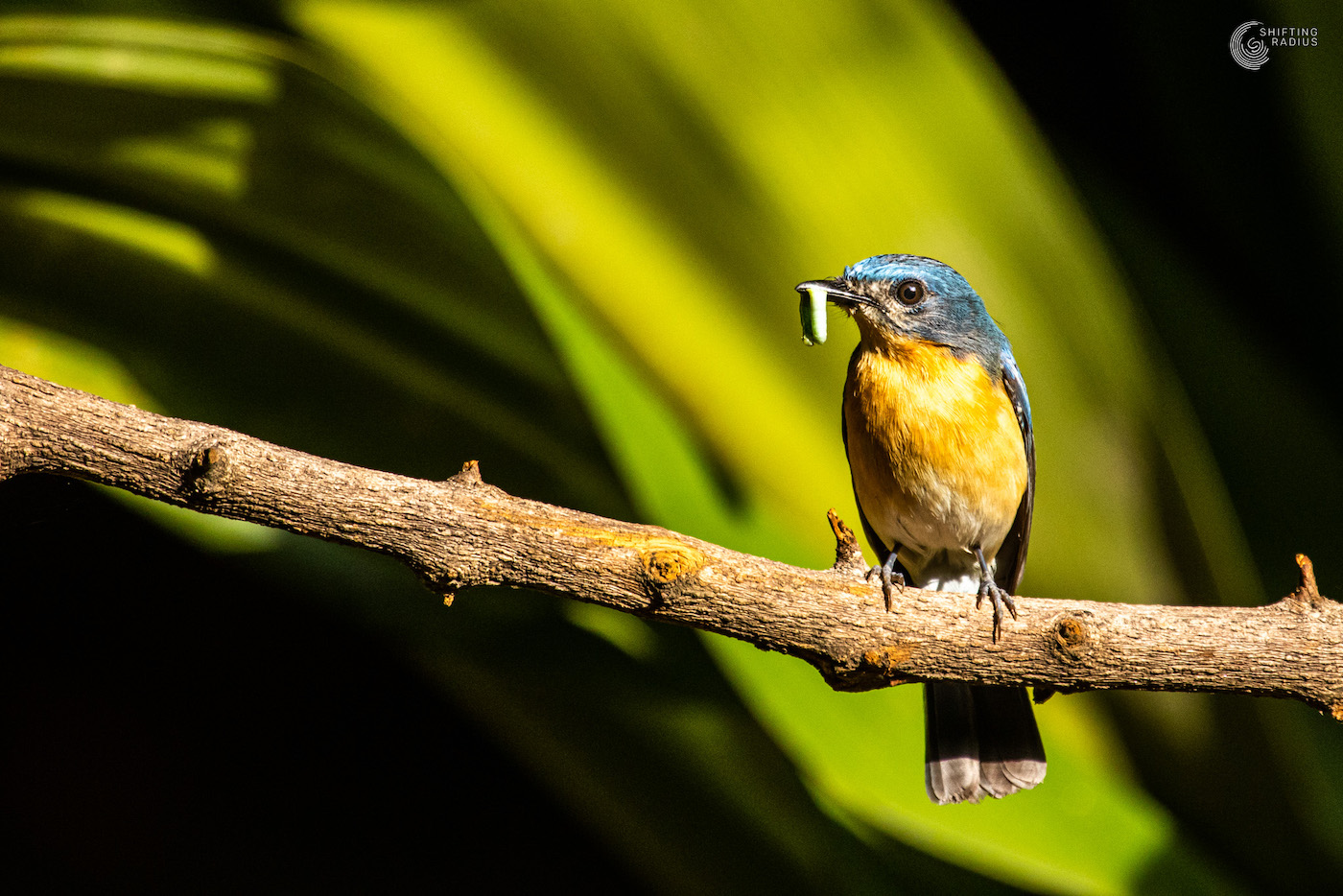 On the 16th, I got a hazy shot of the little ones too. Also, a confirmation that there are only two of them. All hell broke loose when Ravindra messaged on the 17th and said the juveniles and the parents are gone. We all assumed that either the cats or snakes could’ve got them. There was no sign of them the whole day.

Heartbroken, I still had to be convinced that this indeed had a sad ending. I wore a hat and checked out the nest. It was intact and not disturbed. Sort of rules out the cats getting to it. Then I heard Watson (aka Jayan aka Chayant) yell “No shit, Sherlock”.

Chayant and I did our routine walk in the evening. By routine, I mean through the death maze where he almost got me killed last year behind Srinidhi Greenwoods. After making it alive, we reached Resonance and went to investigate this story further. Watson heard the Tickell’s calls and said they are around.

Later at midnight, I don’t know how he does it, but he found the two little juveniles and promptly messaged me.

What do you think I did first thing in the morning today (19th)?

The following visuals give me hope. Of life and everything else, it has to offer. This pair didn’t really stand a chance of bringing up their young ones as the nest seemed way too compromised.

The following visuals also give me another hope. I suck at photography in low light conditions and I need to get better.

All of these were shot from a distance as I didn’t want to disturb either the parents or the little ones both of which were already taking short flights. They were also hiding under thick foliage. 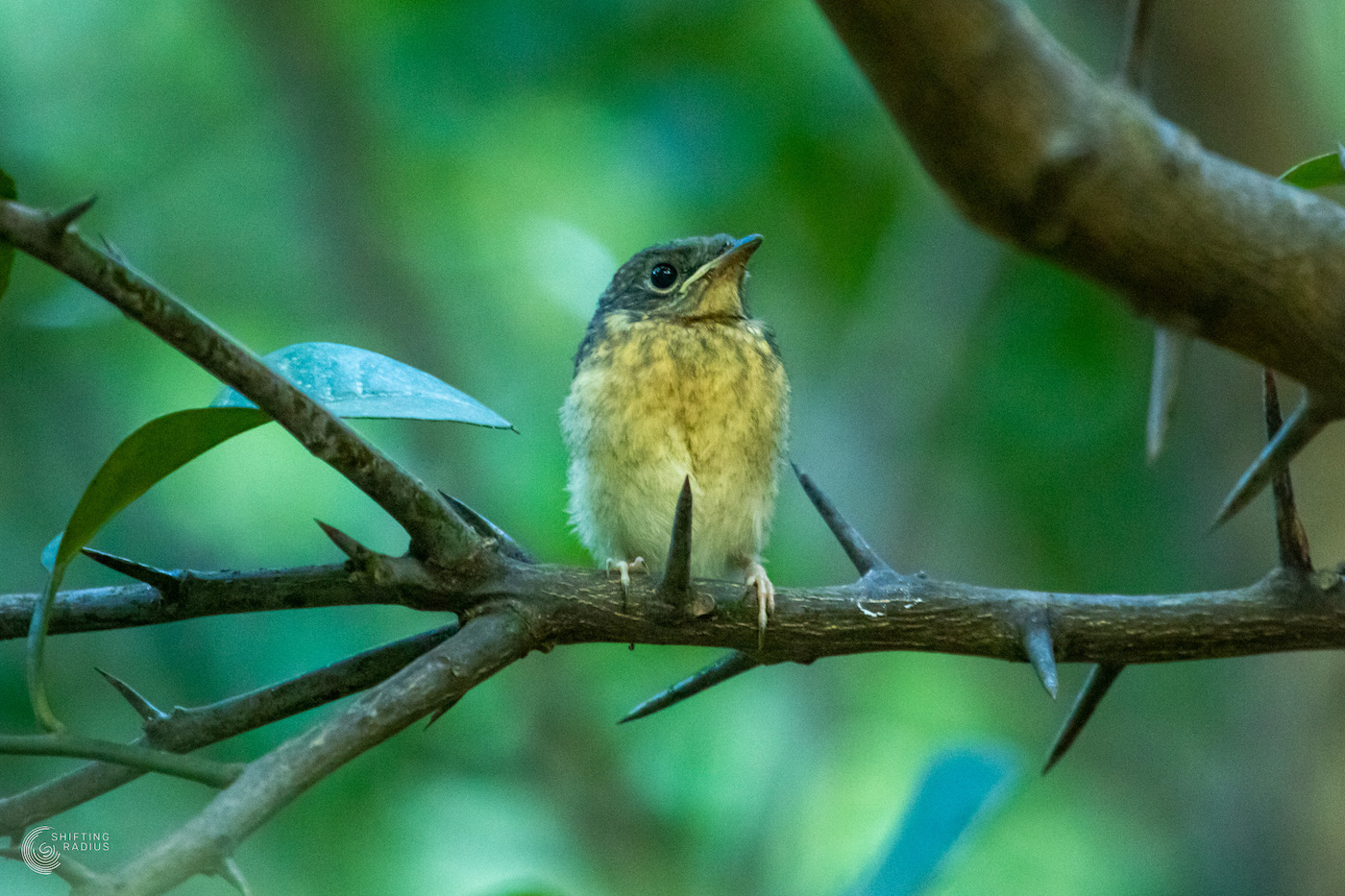 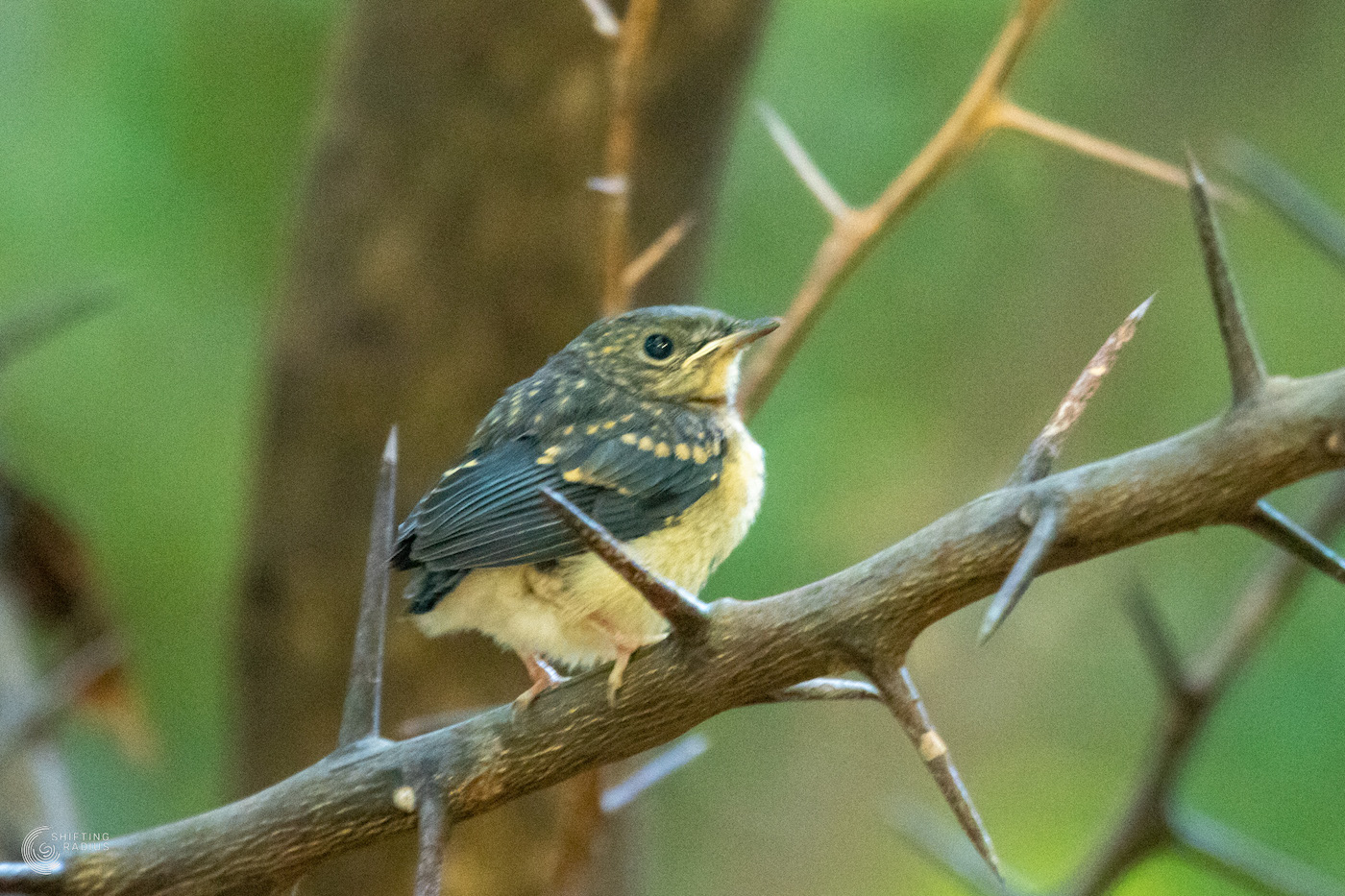 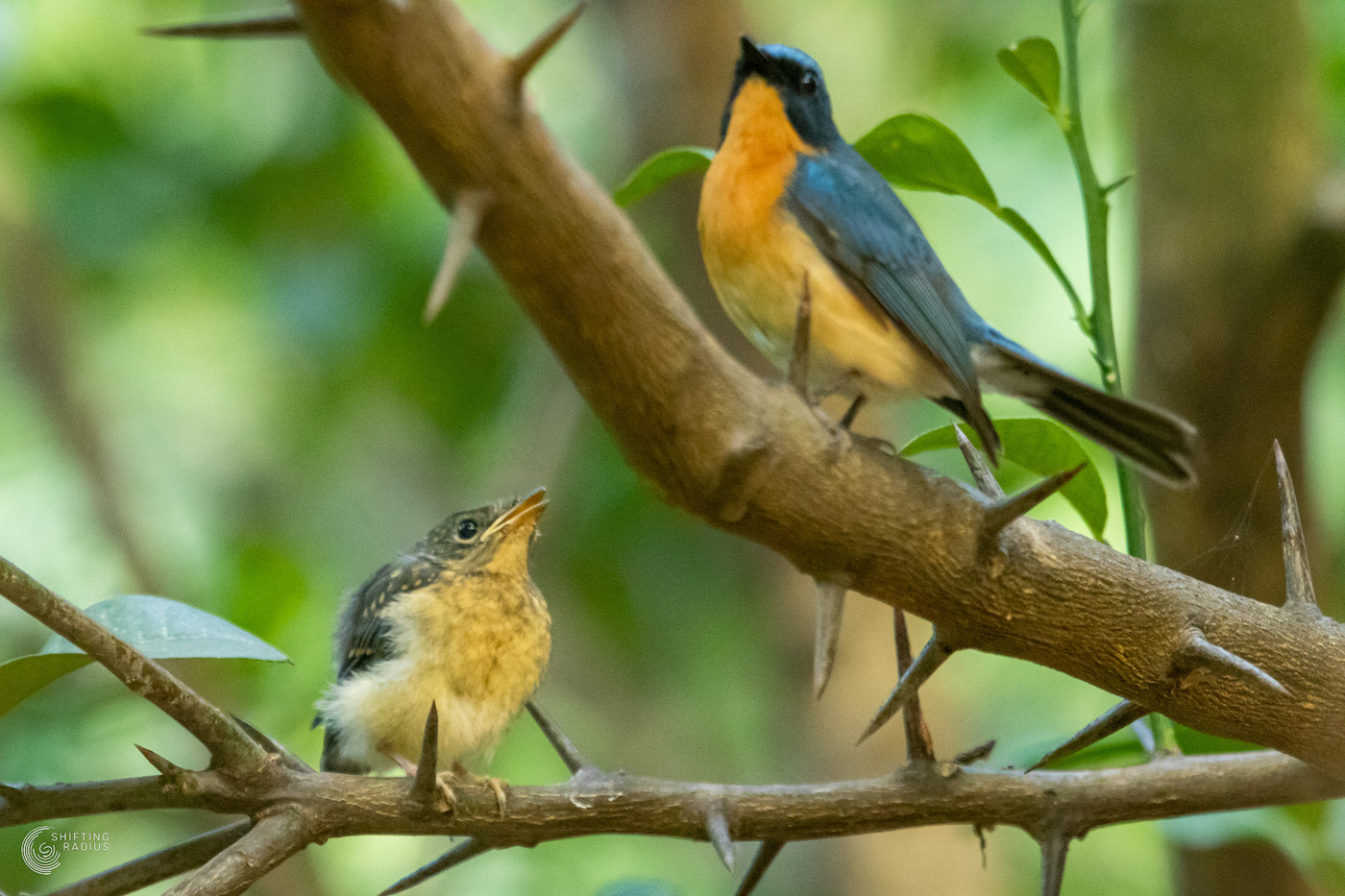 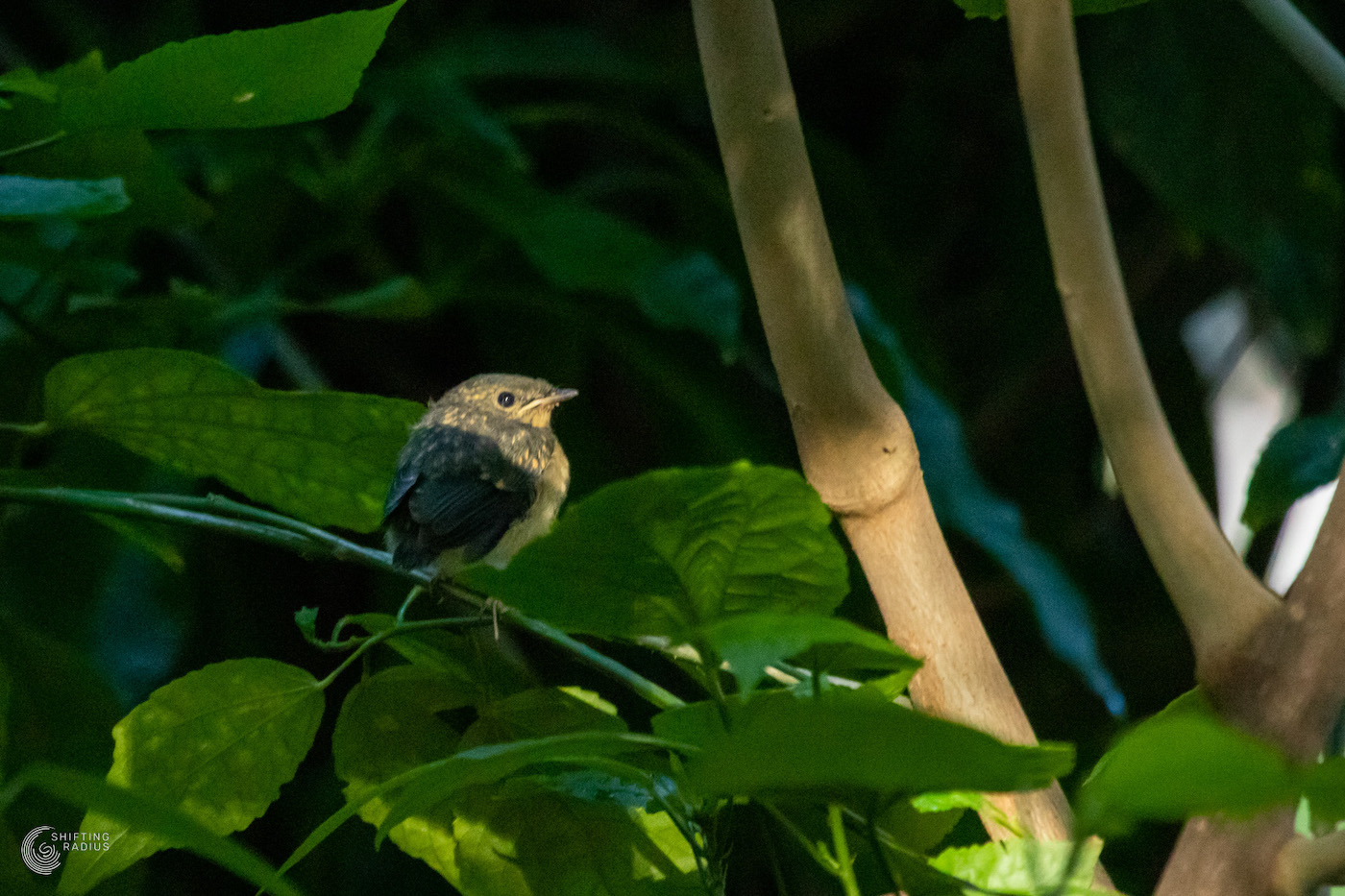 Finally, if you are wondering which is the song that resonated with the story, I’d like to leave you with this.

Not the end after all. Found both the juveniles together this morning. They haven’t moved away from yesterday’s spot. Feeding by the parents continues. So does terrible low light photography.